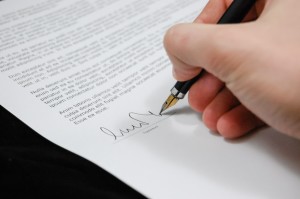 Like so many niche businesses, franchising has a language all its own.  To the average layman, these terms can be overwhelming and sometimes confusing.  Our Colorado Franchise Attorneys make these definitions easy for anyone to understand.   Here are definitions for many of these terms :

“ACH” or “Automated Clearing House” refers to the process used for electronic bank-to-bank transfers of fees due to Franchisor.  This means that the Franchisor can automatically withdraw funds from your account to pay for such items as Royalties and advertising fees.

“Affiliates” means an entity controlled by, controlling, or under common control with another entity.  Affiliates are sometimes called “sister” companies.

“Arbitration” is an alternative dispute resolution mechanism that replaces a state or federal court.  In arbitration an “arbitrator” or “arbitor” (acting as a private judge) is called upon to resolve a legal claim between the Franchisor and Franchisee.  The decision of the arbitrator is as binding on the parties to the disputes as would be the decision by a court of law.

“Area Developer” means a person or business entity that agrees as a Franchisee to open multiple franchised businesses within a certain development area.  The Area Developer signs a Franchise Agreement with the Franchisor, and then owns and operates each unit developed under the agreement.

“Computer System” means the computer hardware and software that the Franchisor requires you to have to operate the franchised business.

“Compliance” refers to the minimum standards you must meet to remain a Franchisee.  Compliance requires that you follow the system described by the Franchisor and that you make all payments to Franchisor on a timely basis.  Sometimes the Franchisor will deem you to be out of compliance if you have breached the Franchise Agreement “x” number of times in a 12-month period even though you may have timely cured each such violation.  In such a case, the Franchisor may may terminate your franchise rights because you fell out of Compliance.

“Default Notice Fee” means the then-current fee that the Franchisor may charge if it must send you a notice of default.

“Designated Manager” refers to the person besides the owner of the franchise that has received the Franchisor’s training and who can operate the franchised business in the absence of the owner.  This person may be identified by another title in a Franchise Agreement.  The meaning however will be the same.

“Due Date” usually means the date on which Royalties and other fees are due to Franchisor and is the date that the Franchisor will automatically take money from your operating account through the ACH process.

“Earnings Claims” now called a “Financial Performance Representation is any oral, visual, or written representation made by the Franchisor to a prospective Franchisee that states or implies any specific level or potential for any sales, earnings, profits, or similar financial gain that could be realized by the Franchisee.  Franchisors can make such representations ONLY if the information is disclosed in Item 19 of the disclosure portion of the FDD.

“Effective Date” usually means the date that the Franchise Agreement was fully executed by the Franchisor and Franchisee.

“Event of Default” refers to any of a list of breaches defined in the Franchise Agreement.  For instance, an Event of Default would be your failure to follow the system.  This could be because an employee failed to wear a uniform or because you failed to deliver the quality of product or service required under the Franchise Agreement.  Some Events of Default can shall be any default of any provision of Sections 10.1 through 10.3 of Article 10.

“You will not receive an exclusive territory.  You may face competition from other Franchisees, from outlets that we own, or from other channels of distribution or competitive brands that we control.”

“Federal Trade Commission” is the governmental authority that regulates franchising on a national level.  The FTC (with the help of the North American Securities Administrators Association the “NASAA”) dictates the content of the FDD.

“Force Majeure” refers to so-called “acts of god” or other matters of which you have no reasonable control.  In most Franchise Agreements an event of Force Majeure usually excuses both the Franchisor and Franchisee from performing certain obligations until the event has passed.  Many times Force Majeure will NOT excuse a Franchisee from making monetary payments.  If you cannot offer a certain service or good because of serious weather, you will be excused from what otherwise would be an Event of Default until the weather has cleared up.

“Franchise Disclosure Document” or “FDD” means the disclosure document required by the Federal Trade Commission to be delivered to you at least 14 calendar days before you sign any agreement or pay any money to the Franchisor.  19 states have rules or regulations that modify the FDD.  Talk with us about these so-called “registration states”.  The FDD contains several parts.  The first part of the FDD is the disclosure portion that comprises 23 “Items”.  The FTC dictates that all Franchisors offering a franchise in the United States MUST follow the exact same format when drafting the disclosure portion.  The disclosure portion is then followed by other mandatory disclosures including the Franchise Agreement and any other documents you may be required to sign.

“Franchisee Manual” or “Manual” means the operations manuals (that may be more than one manual, booklet, or handout), that will be delivered to you before you open for business.  The Franchisee Manuals usually explain how to operate the business, including such matters as accounting, customer service, preparation of goods to be delivered to the customer (e.g. the way to cook a burger), quality control, and the like.

“Grand Opening” means the celebration you fund at the time of the opening of your franchised business.  The “Grand Opening Cost” is the amount you spend on your Grand Opening.

“Initial Franchise Fee” and “IFF” means the fee you pay us for the award to you of the Franchise Agreement.

“Late Fee” means the fee that the Franchisor may charge for your failure to timely make payments.  If the ACH method is used, you may incur a Late Fee if there is not enough money in your account to pay what is owed to the Franchisor.

“Local Advertising Fee” or words to that effect refers to the minimum amount of money that the Franchisor may require you to spend on advertising in your Exclusive Territory or in your local market.

“Noncompetition Covenant” is a part of the Franchise Agreement that states you may not invest in, or work in a Competitive Business.  Since such covenants seek to deny you the right to work in a certain industry, virtually all of the states will strictly construe this covenant against the Franchisor.  Indeed in some states such as California, such covenants are deemed unenforceable .  To be enforceable at all, covenant must be reasonable in its definition of a Competitive business, in the time period during which you are denied the right to participate in a competitive business, and in the identity of geographic area in which you are denied the right to compete.  If you operate a restaurant, a reasonable covenant may for a period of between 6 months and five years prohibit you from operating a similar restaurant (being one that serves the same type of food in the same type of atmosphere) within your Exclusive Territory (if one was given to you), within the Exclusive Territory of another Franchisee or company-owned restaurant, or with “x” miles of the perimeter of any such Exclusive Territory.

“Opening Period” means the date by which you must be open for business.

“Proprietary Information”, “Confidential Information”, “Trade Secret Information” or words to that effect refers to the secrets of the Franchisor that make its franchise unique and different.  It often includes all of the Marks, the Manuals, the training methods and materials delivered to you, recipes, and financial aspects of the business.  This information is never to be shared with anyone except employees and then only if he or she needs the information to perform his or her work.

“Royalty” means either a flat fee charged by the franchisor for each transaction done through your franchised business, or means a percentage of your gross and net revenue that the franchisor charges you for each dollar of revenue generated by your business.  When expressed as a percentage Royalties can range from 1% to 8% or more.  This is one area in which Franchisors must compete with other franchise opportunities.

“Successor Franchise Fee” or “Renewal Fee” means the fee that the Franchisor may charge when you seek to renew the franchise at the end of the Initial Term.

“Successor Franchise Term” means the number of years that the renewal lasts.  It may be a term equal to the Initial Term or it may be a shorter period.

“System” means the Franchisor’s manner and method without limitation: the manner and method of training delivered to the Franchisee; the operations, standards, and procedures the Franchisee will use in the day-to-day operation of the franchised business; the advertising programs to be used in promoting the franchised business; the economic and financial characteristics of the Franchised Business; any Proprietary Information owned by Franchisor; any of its Marks; and all other copyrighted, trade secret or confidential information.

“Trademarks” or “Marks” means all trademarks, trade names, logos, service marks, and similar commercial symbols that the Franchisor requires you to use in identifying your franchised business.  In virtually all cases, the Franchisor will have a trademark registered with the United States Patent and Trademark Office (USPTO).  The presence (or absence) of this registration is found at Item 13 of the disclosure portion of the FDD.

“Training” refers to the training that the Franchisor gives you before you open for business.  Training must be defined in detail in Item 11 of the disclosure portion of the FDD.

“Transfer” means the act of transferring your interest in the franchised business, or you (if you are a business entity) to another person or entity.  Transfers are almost always strictly controlled by the Franchisor.

“Transfer Fee” is the fee that most Franchisor’s charge at the time of the transfer.

We hope that this has helped explain Franchising Nomenclature in non “legal speak” so that you can understand any of the terms you may encounter while starting your own franchise.  As always, we recommend consulting with a Colorado Franchise Lawyer before proceeding with any franchise agreement.  We are here to answer any questions you may have, email us at michael@businesslawyer.com or call us today at 1-888-780-0910 and we’d be happy to help you with any aspect of setting up your new franchise.